Get fresh music recommendations delivered to your inbox every Friday.
We've updated our Terms of Use. You can review the changes here.

Beyond the Beyond and Further Beyond​.​.​. 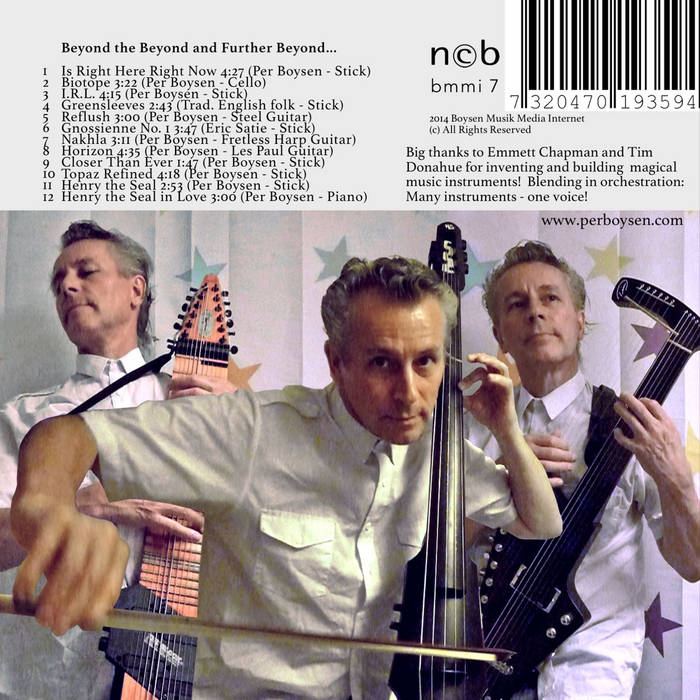 This album is a solo project and I’d like to give credits to all the wonderful electric string instruments I was lucky to work with:

1) The Twelve Stringed Stick Guitar, SG-12.
The 36″ scaled Stick has been around since the early seventies and often used for bass parts on records (Peter Gabriel, King Crimson…). But this little 26,5″ scaled two-handed fretboard tapping instrument offers a rather different tone. My gratitude reaches out to Emmett Chapman for inventing the Stick in the sixties and for putting down the hard labor to develop and manufacture it all since 1974. Check out Stick Enterprises at www.stick.com

2) Electric Cello.
This low price cello model was designed by Ned Steinberger, that used to make guitars before. It doesn’t use electro magnetic pickups, like the Stick and electric guitars do, but some other construction that offers the player to flip a switch to optimise the tone pickup for bowing vs finger plucking. I use both ways of playing in these recordings. My NS cello is the five-stringed model.

3) Fretless Harp Guitar.
This is a wonderful music tool! A fretless ebony board neck with six strings and also six freely twanging harp strings. Both 6-strings groups have EMG electro magnetic pickups and may drive two different amplification rigs, if you like it that way. The harp side does in fact have one “fret”; if moving away your left hand from the fretless neck you can push down any harp strings towards the fret to raise the pitch by a half note. What makes this harp guitar different from traditional harp guitars is that the harp- and neck string groups are tuned in the same octave (traditionally harp guitar’s harp strings are bass strings). Doubling notes for a unison sound or plucking close clusters are techniques I love also on the Stick Guitar.

The man that brought this lovely instrument to the planet is Tim Donahue. He built his first prototypes in the early eighties and still plays the TDHG better than anyone! Tim lives in Japan where he leads manufacturing of these guitars. www.timdonahue.com

4) Steel Guitar.
Mine is the Dusenberg Fairytale lap steel model that has two levers that will let you soar into those classical country licks without having to deal with the monstrous pedal steel guitar. I use a heavy steel on the strings which initially felt a bit awkward compared to the feather light glass-slide-on-finger treatment I’m used to give my vintage style Stratocaster.

5) Electric Guitar.
Not much to say about this one, I guess. My oldest premier instrument now used on only one track out of this album. I still love guitar but use it quite rarely these days. You know, sometimes it just sounds so… guitar-ish that it almost kills the music.

6) Fractal Audio AxeFx II.
This is the very catalyst that unleashes the magic! If you have ever loved the sound of driven tube amps and dusty speaker cabinets this digital modelling device is loaded with the classic models and some new. It also offers great classic effects and best of all: it will let you patch up different components into a combined amp-cab-effects rig system and develop your own custom patches for instant control of live electronics. Took me about a year of intensive use to get into all of its virtues. Can’t hail this box enough, it is almost too good to be true. What a sound! What a great vibe to play through it! It not just makes all my electric instruments sound good, this amp also maximises the dynamic feel in physically playing string instruments. I’d say that the experience of playing through the AxeFx is that you suddenly gain access to a much wider spectrum for expression! Small moves on the strings makes a bigger difference sonically. www.fractalaudio.com

Swedish multi-instrumentalist and composer Per Boysen has performed many shows around Asia, Europe and the USA – both as a solo performer, in duets and with ensembles. Appearances in general public areas as well as at world famous institutions like the Swedish Norberg Festival, Présences Électronique in Paris and the North Sea Jazz Festival in Rotterdam. ... more

Bandcamp Daily  your guide to the world of Bandcamp